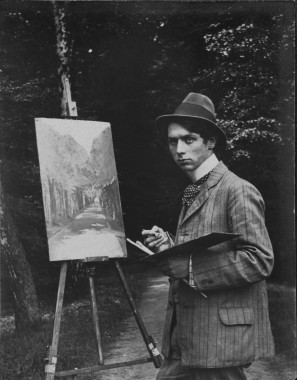 The young Max Ernst at the easel

Max Ernst is born on April 2nd at Schlossstraße 21 in Brühl. His father, Philipp Ernst, teaches him how to paint early on.

During his studies in ancient philology at Bonn University, he contributes to the exhibition of expressionist art from the region (Rheinische Expressionisten).

During World War I, he is deployed at both the western and eastern fronts. Shortly before the end of the war, he marries the art historian Luise Straus.

He starts the Cologne Dadaist movement together with Hans Arp and J. T. Baargeld.

His only son, Ulrich (Jimmy) Ernst, is born.

He moves to Paris and stays with the poet Paul Éluard and his wife Gala.

Max Ernst delves into frottage techniques and publishes his Histoire naturelle with 34 works a year later.

After the beginning of World War II, Max Ernst is repeatedly sent to French internment camps as an “enemy national”; in Germany, his work is classified as “degenerate art”.

He emigrates to the United States in July. In December, art collector Peggy Guggenheim becomes his third wife.

Together with his fourth wife, Dorothea Tanning, he moves to Sedona, Arizona.

In honor of his 60th birthday, the largest Max Ernst retrospective to date is shown at Augustusburg Castle in Brühl.

Max Ernst returns to France together with Dorothea Tanning.

He is awarded the Grand Prize for Painting at the Venice Biennale, which launches his international success and prompts major retrospectives and numerous awards.

He visits his home town to attend the unveiling of his fountain outside what is now Brühl’s city hall and the first ever award ceremony of the Max Ernst Scholarship.

The University of Bonn awards him an honorary doctorate.

On April 1st, one day before his 85th birthday, Max Ernst dies in Paris.